Apple Crisp, the Dessert You Don’t Want to Miss! 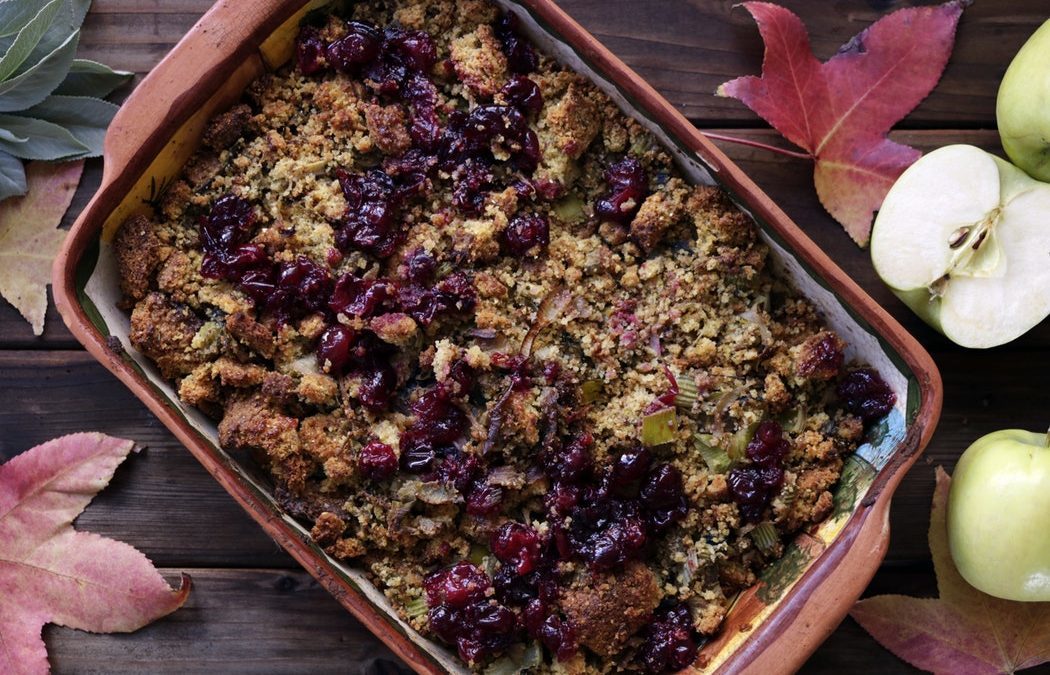 Apple Crisp or Apple crumble, depending on which side of the pond you are from, is one of those dessert recipes that are a household staple. Not only is it made with easily accessible ingredients, but preparing it is a breeze, which might be the reason apple crisp is so popular.

Of course, being relatively inexpensive and easy to prepare would amount to nothing if this dessert wasn’t TASTY!  The sweet cinnamon aroma and the tartness of the apples, their softness and the crispiness of the streusel topping, make apple crisp a combination of contrasts that is nothing short of perfect!

Come fall and the craze for apple crisp begins, but who said that this simple, delicious dessert is confined to one season only? We chose to write a word or two about apple crisp in the wake of spring, precisely because we don’t believe in season-appropriate cooking: If you crave it, make it! 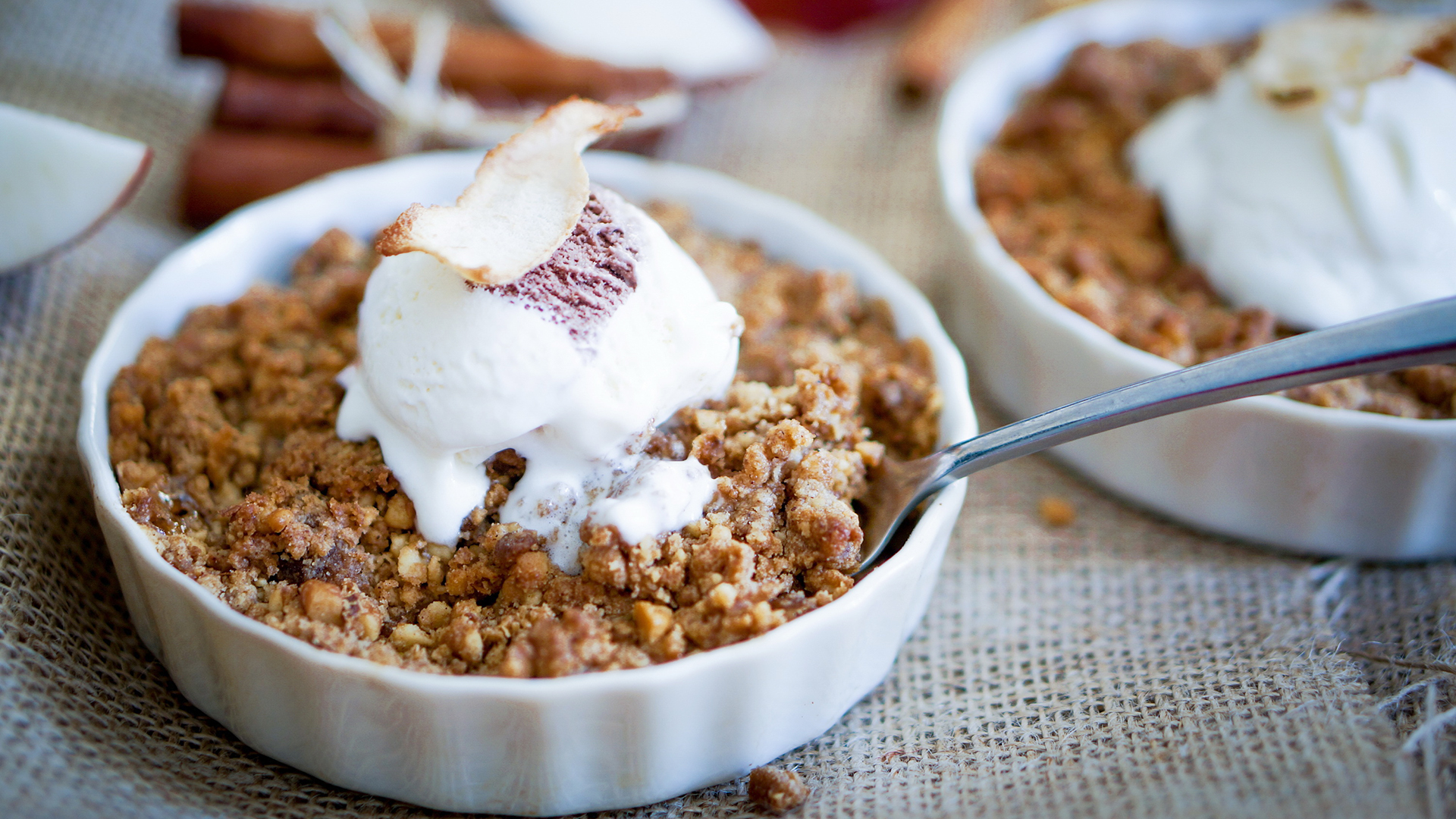 If you hadn’t noticed it yet, going to the bottom of how recipes came to be is something we at MyGreatRecipes love doing. And while there are many recipes that date back to Medieval times, or to ancient times even (as it is the case with pancakes), apple crisp cannot brag with a long history behind it. The fact that it didn’t make its way into the Fannie Farmer Cookbook, the collection of American recipes that dates back to 1896, only goes to show that apple crisp is all new and modern.

But, given its popularity with cooks and regular fellas alike, it is sure going to be around for generations to come. So, the very first printed reference to apple crisp (in the Everybody’s Cook Book: A Comprehensive Manual of Home Cookery) from 1924 (which seems pretty close to us), will seem pretty down in history to those enjoying apple crisp in 2300 J.

The good old proverb “An apple a day keeps the doctor away” has not been around for so long in vain. The benefits of eating apples have been recognized by people in history, but this very proverb appeared in Wales somewhere in the 19th century. Author, Caroline Taggart, explains that the original was: “Eat an apple on going to bed, and you’ll keep the doctor from earning his bread”, later to get modified in this shorter more up to point variant. Now, let’s see the nutritional value of these miracle foods and some of their possible health benefits.

Nutritional Value of Apples per 100 grams

First and foremost, apples are rich in antioxidants. These disease-fighting compounds repair oxidation damage, and what’s more, they can even prevent it. This means that eating apples is of great importance for the improvement of our brain function and overall neurological health.

Being rich in quercetin, the antioxidant that fights oxidation and inflammation of neurons is not only good for the nervous system, but for boosting our immune system as well. Stimulating the production of the essential neurotransmitter acetylcholine, apples are said to improve memory. Last, but not least, eating apples reduces the risk of developing cataracts by 10 to 15 percent.

The apple cultivars that are the richest in antioxidants are the Red Delicious and the Granny Smith, ranked 12th and 13th out of over 100 foods rich in antioxidants per serving by USDA in 2004. Coincidence or not, Granny Smith apples make for the best apple crisp ever! 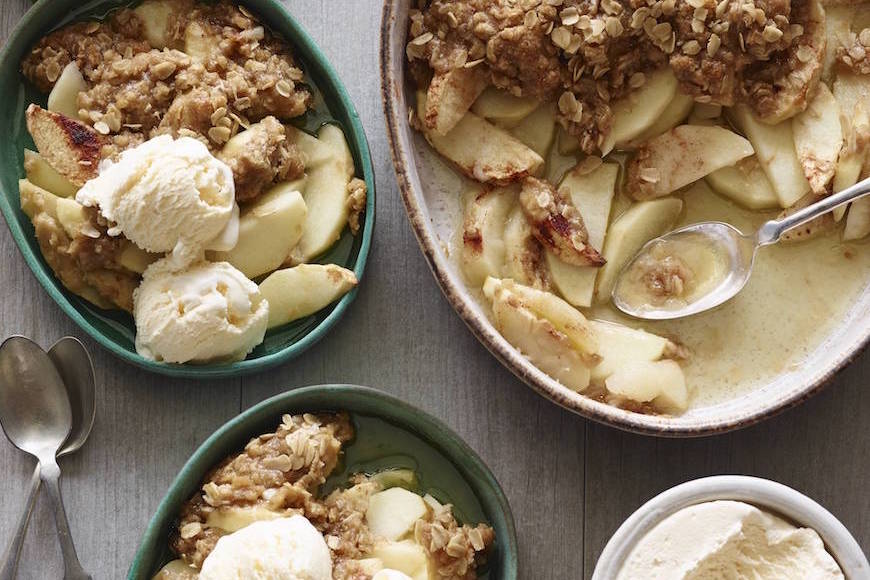 A medium sized apple contains 4 grams of fiber, (the daily intake of which should be 25 to 30 grams of food).

Fiber rich foods will make you feel satiated quicker and will leave you with the sensation of being full long after you’ve consumed them. (this is mainly due to the fact that fiber delays gastric emptying). The type of fiber found in apples called pectin, classed as a soluble and fermentable fiber, is, in fact a great prebiotic. By feeding the good bacteria in the gut fiber found in apples can help us with the weight loss process, it can help lower the “bad” LDL cholesterol and triglycerides, which in turn means it is a guard against heart disease and type 2 diabetes.

Apples are rich in vitamins among which Vitamin C, a vitamin well known for its anti-infectious power; B-complex vitamins that include riboflavin (vitamin B2- 0.026 mg), thiamin (vitamin B1 – 0.017 mg), and of course, vitamin B-6 (0.041 mg) crucial for the regulation of red blood cells and the nervous system in general.

The best apple crisp would ideally be made with varieties that have a tart taste (so that you get that contrast we talked about earlier), but you can always use a sweeter variety if you want. In fact, a mix of several different apple cultivars is going to render the best results. Go for Granny Smith (for all the nutrients mentioned above), Empire, and Honey Crisp. And a mix of Rome Beauty and Jonathan apples will be just as tasty.

Well, it starts and ends like this, there is not a trick in the (cooking) book that isn’t here J. Regardless of whether you are pressed for time, or are just partial to pies and pastry, preparing an apple crisp is the way to go. And if you follow the bellow-mentioned simple tips your apple crisp will always be the best one anyone’s ever tried!

Even if you do not have your own farm, buying locally will benefit your community, and you can rest assured that they are 100% organic.

Once you get a hold of fresh apples, peel, core, and slice them. If you are the “lazy” type and think you’ll cut corners by simply omitting the peeling part you are very wrong! You should always peel the apples when making an apple crisp, and to make sure they bake at the same rate, cut them in uniform-sized chunks. 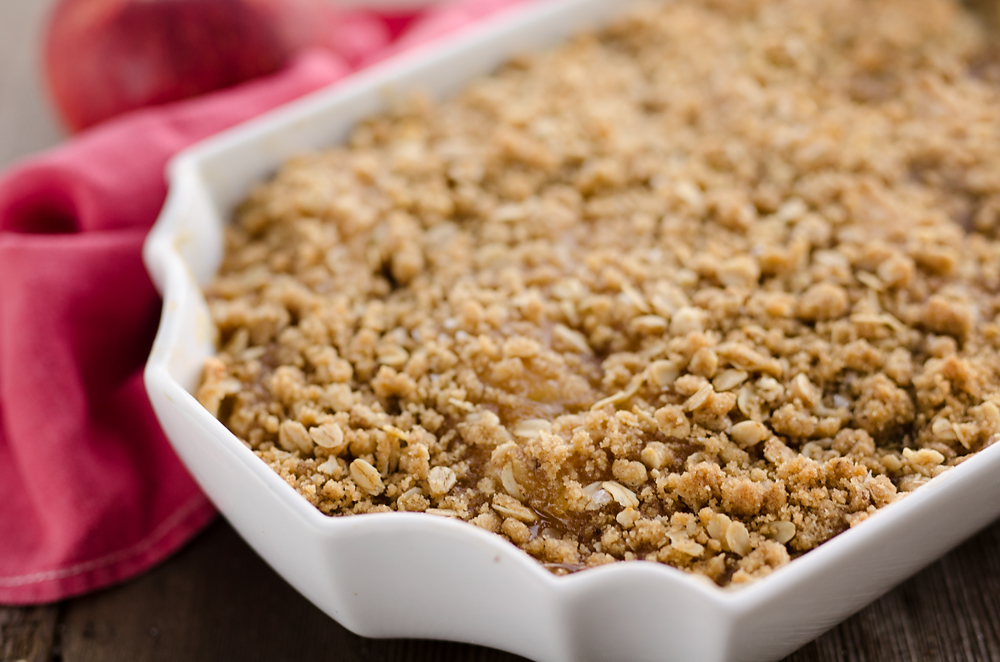 Go low on the sugar

Now, go ahead and add some sugar and toss to coat the apples. Please, please do not go overboard with it and use just enough to sweeten the apples (the aroma that the cinnamon gives to this dessert will make up for the lack of sugar). Another thing to do is you use brown sugar, or for an even healthier option, use granulated natural stevia.

There is hardly a combination that can beat that of cinnamon and apples, but adding nutmeg to the equation has proven to be great, time and time again. Need even more flavor? Feel free to add cloves. The specific aroma these spices release will make your kitchen smell heavenly good

Make your own crisp topping

You can use a granola mix, but making your own topping will be all the more rewarding. Plus, you can add as many ingredients as you please, making the apple crisp even crispier, and to preference, even chewier. For a crispier topping, add chopped nuts (almonds, walnuts, or pecans would be great), oat flakes (you can even get vanilla flavored ones) and if you want the later outcome, add raisins or dried cranberries.

When preparing the topping yourselves, don’t add the butter with a spoon, rather mix it with the ingredients using your fingertips. As you mix, the topping will start forming grains. Don’t use too much of it, because there is a high chance of the crisp becoming soggy. This, of course, doesn’t mean you should skip the butter altogether or use too little of it, in that case, the crisp will be bland.

Whether you opt for warm caramel sauce, whipped cream, or vanilla ice cream, this dessert wouldn’t be complete without at least one of these. 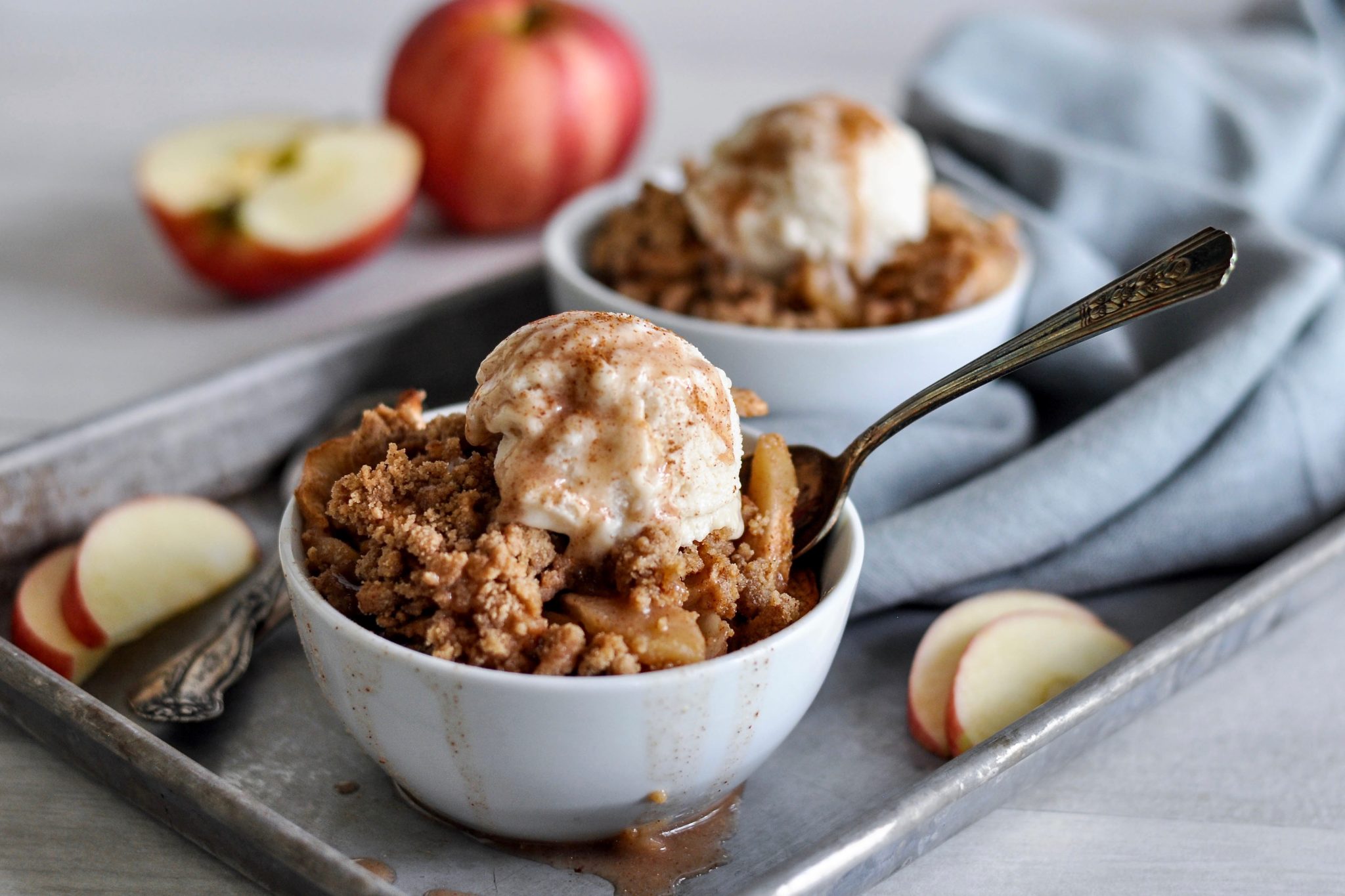 Want to Make the Apple Crisp Ahead?

No worries, you can easily do this, but bear in mind that you can refrigerate a crisp only a day before baking. In order for the apples not to get brown, pour a tiny bit more lemon juice.

Store the apple mixture and the topping separately. Making sure the first is in an air-tight container, whereas the later, in a ziplock bag. Sprinkle the streusel topping (or your homemade one) on top once you are ready to bake the crisp.

Want to Freeze the Apple Crisp?

Say you are one of those people that love to spend a whole day cooking a month’s worth of food, apple crisp is a great recipe suitable for refrigerating. In fact, it can be frozen for up to 3 months. If you decide to do this, make sure the crisp is all cooled down before covering it with a double layer of aluminum foil. Prior to serving it, it is for the best if you thaw overnight in the fridge, then warm it up in a 350°F oven for around 25 minutes, or until heated through.

Although there are quite a lot of desserts that call for apples with sweet toppings, saying that they are apple crisp variants would be too farfetched.  However, we did think these recipes needed an honorable mention.

A great dessert best served warm. Apples and cinnamon pair together to give out the best of this easy to prepare dessert.

Layers of apples made with buttered bread crumbs or crackers, sweetened and topped with a sauce.

This version includes baked apples topped with a pie crust, or baking powder biscuit dough then covered with a topping in clumps. Other names include apple grunt, apple slump, and apple pandowdy.

All of this being said, we believe that you have never tried an apple crisp better than The Oaty Apple Crisp, a memory-jogging dessert that will help you find your own safe place!

Article Name
Apple Crisp, the Dessert You Don't Want to Miss!
Description
Apple Crisp or Apple crumble, depending on which side of the pond you are from, is one of those dessert recipes that are a household staple.
Author
Laura Bracket
Publisher Name
MyGreatRecipes
Publisher Logo